MISSOURI CITY, Texas – Just weeks after breaking ground on phase II, NewQuest Properties has completed a triple land play for 109.32 acres at Fort Bend Town Center in southwest Houston, setting the stage for the development of 589 urban apartments and another 200,000 sf of mixed-use commercial space.

Houston-based NewQuest has sold 23.18 acres in two tracts to Sueba USA Corp., a leading multifamily developer, and acquired 86.14 acres to expedite its expansion plan for the massive mixed-use development in Missouri City. Dirt will begin to fly on infrastructure for Fort Bend Town Center’s third phase in second quarter 2022.

“We want Fort Bend Town Center to be the premier lifestyle hub for shopping, dining, entertainment and high-end apartments in southwest Houston,” says Andrew Alvis, a NewQuest senior associate. “This will be the first multifamily development to come out of the ground at that intersection.”

Alvis single-handedly negotiated the multifamily land sales. Buyers of record are Sueba Land LP and Sueba Development 211 LP, which picked up 11.43 acres and 11.75 acres, respectively, from NQMF-FBTC Tract B LP. In the third transaction, Alvis represented NewQuest in its 86+-acre purchase from the estate of John C. Werner. The seller’s representatives were Darin Gosda and Todd Casper of CBRE.

NewQuest now controls three corners at the intersection of Fort Bend Parkway and TX 6, which is a 15-minute drive from the world-famous Texas Medical Center. The developer will deliver the ready-to-build land to Sueba in Q1 2023.

The site plan calls for a quartet of four-story buildings, two of which will feature courtyards, swimming pools and other in-demand amenities. The residential mix primarily will be one- and two-bedroom units. Surface parking will act as a buffer for the adjacent mixed-use commercial space and nine pad sites. There will be walking trails in an abutting wetlands area.

“There are many medical professionals of all ages who want high-end, urban-style units outside the city versus what’s historically been available,” Alvis says. “We plan to fulfill that demand while also putting bodies on the ground to further support our retail, restaurant and entertainment tenants.”

NewQuest’s urban lifestyle setting will boast the perks of familiar brands for shopping, dining and entertainment venues, all within a short walk of the residential units. Negotiations are underway with several national retail and leisure anchors for phase III.

NewQuest’s three phases are being touted as the commercial heart of Missouri City. The build-out will seed the intersection with nearly one million sf of mixed-use space on roughly 180 acres at three corners, positioning Fort Bend Town Center to be the dominant force in the marketplace when the toll road is extended beyond the Brazos River.

“Fort Bend Town Center will be one of the largest mixed-use developments at completion west of Medical Center,” Alvis says. 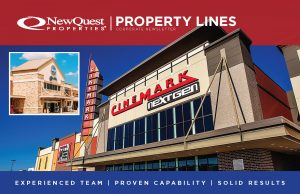