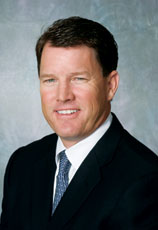 Dean Lane joined NewQuest Properties as a Partner in 2003. He plays a critical role on NewQuest’s development team, working on the design, tenant-mix and construction of over 75 projects. With a portfolio comprising more than five million square feet of gross leasable area over the last several years, his major projects include town centers such as Sherman, Cy-Fair, Brazos, Victory Lakes, Hutto, Creekside, Stone Hill, Stone Park, Pflugerville and Aliana.

During his career, Dean has completed numerous lease transactions for his clients, ranging from 5,000 – 150,000 square feet. One of Dean’s largest transactions completed in recent years was the 138-acre tract of land sale to CBL REIT for the 800,000 square foot Pearland Town Center Mall that opened in 2008. Previously a Vice President and Partner of Boyd Page & Associates from 1991 – 2003, Dean’s career started in the real estate industry with CB Commercial Real Estate Group in 1984. He is a member of the International Council of Shopping Centers (ICSC) and a graduate of Texas A&M University. In his spare time, Dean is with his wife Regina and their two daughters, Halle and Jesse, and volunteers for the Houston Livestock Show and Rodeo.