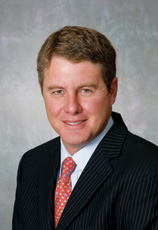 Steve Alvis is the co-founder and managing partner of NewQuest Properties. He took a leave of absence from Texas A&M Veterinary School and started Quest Properties in 1985 as the savings and loan crisis began. Alvis sold REO portfolios for failed savings and loans and accumulated approximately 40 shopping centers in Texas.

Later, Alvis utilized his real estate experience to begin building retail developments which included Cinemark’s first all-stadium seating theater, as well as the first 24 Hour Fitness in the market. NewQuest continues to represent them both, along with their real estate needs across Texas.

Today, NewQuest currently represents more than 75 national, regional and local tenants throughout Texas. Having developed over 15 million square feet with a portfolio in excess of $2.0 billion, NewQuest is the largest privately-held shopping center developer in Texas.

Alvis received his Bachelor’s Degree from Texas A&M University. He is currently a member of the Young President’s Organization (YPO – GOLD), the Chief Executives Organization (CEO), and the International Council of Shopping Centers (ICSC.) Alvis works closely with TxDOT serving on Lt. Governor Dan Patrick’s Transportation Advisory Board, and was appointed by the Lt. Governor in 2018 to the Texas Facilities Commission.  He also serves on the Board of Economic Development for Waller County.

Alvis is an active owner and developer of The Clubs at Houston Oaks. He and his wife Marci have two sons, Austin and Andrew. Austin joined NewQuest in 2015 after receiving his MBA from Rice University. Andrew joined NewQuest in 2017 and is a graduate of LSU. Alvis and his family spend some of their spare time skiing in Colorado and at their cattle ranch in Las Vegas, New Mexico.